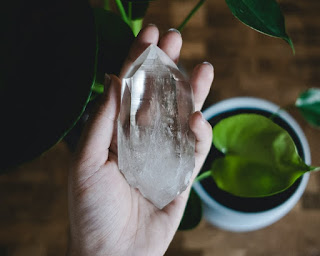 Crystals are also powerful amplifiers. Berry, another priestess in Z’s circle, taught me that crystals store and back up our thoughts. She pointed out that it is very important to clear out any thoughts of negativity when working with crystals, as many can store this bad energy and emanate it in all directions. She taught me to be clear in my thinking when working with crystals so that all influences would be both positive and good. You see, crystals affect the energy of the body as well as the energy of the mind.

Berry showed me a technique for measuring this amplification. She had me choose two seedlings; I chose two tomato plants of the same size. Then, I was instructed to treat the plants exactly the same way in terms of water, light and food. I placed the same quartz crystal I used in the water-transformation test beside the left tomato seedling, which I placed 4 feet apart from the other seedling. When I tended the plants each day, I gave them exactly the same basic necessities, but Berry instructed me to take the crystal beside the leftmost seedling and hold it in my left hand while talking to the plant. It felt a bit silly at first, I admit. But soon, it became the most natural thing in the world to speak with the tomato plant and tell it what a wonderful tomato plant it was and how excited I would be to eventually taste its fruit. Also, I visualized it growing hearty and strong and loaded with tomatoes ripening for salad. Perhaps the most important step in the process was to send positive thought energy to the seedling. The seedling on the right received no daily chats or crystal vibes. After a month, you could tell an enormous difference. Both plants were healthy, but the plant on the left was much bigger and bushier. The crystal had clearly amplified the energy.

Crystals are not only used in batteries; they are batteries in their own right. Crystals become charged with energy and store that energy. Some crystal gazers also believe we can store information in crystals. The shamanic crystal skulls of the Mayans have caused people who have handled them to have many dreams and visions that seemed to be recordings of historic events. These crystal skulls are theorized to be depositors of all the knowledge of the Mayans—crude computers, if you will.

Again, using crystals to store energy must be approached mindfully and with great consciousness. If you are very happy one day, remember to pour some of that bliss into a crystal, and it will remain there as a source for some happiness on a blue day. Do not send negative energy into a crystal, as it will store the bad along with the good and be a negative transmitter.

Very advanced crystal wielders also use crystal batteries for transfer of energy and even for telepathy, which, I must confess, goes well beyond my skill level.

Posted by Cerridwen Greenleaf at 11:00 AM